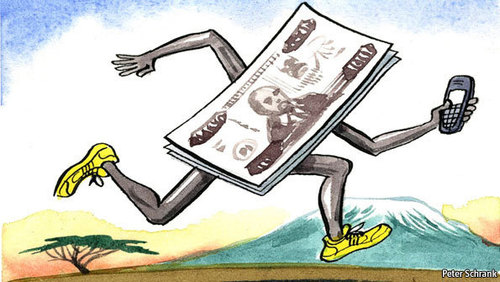 Rather than fighting mobile money, governments should use it themselves.

Innovate: Developing competitive IT-based service industries and fostering ICT innovation across the economy – with a focus on job creation, especially for women and youth.

Connect: Scaling up affordable access to broadband – including for women, disabled citizens, disadvantaged communities, and people living in remote and rural areas.

Download the World Bank Information and Communication Technology Sector Strategy 2012-2015 [PDF]
and provide feedback here what you think about it. Is the World Bank on te right track? Can it deliver on the promises?

The Seventh Annual Internet Governance Forum (IGF) Meeting will be held in Baku, Azerbaijan from 6-9 November 2012. The proposed main theme for the meeting is:

Online registration for the IGF 2012 meeting is now open. It will close on October 15 and the onsite registration will open on Friday 2nd November at the Baku Expo Centre.

To register for the Internet Governance Forum 2012 in Baku, Azerbaijan, please use the Online Registration Form at: https://comanche.vervehosting.com/~wgig/igf/registrationb/threeb.php

Also see the IGF Website for the preparatory process: http://www.intgovforum.org/cms/component/content/article/114-preparatory-process/927-igf-2012

Source: A Victory for the Internet – NYTimes.com.

In a ground-breaking vote on an issue that affects all of us, the United Nations Human Rights Council on Thursday endorsed a resolution upholding the principle of freedom of expression and information on the Internet.

The broad support for the resolution demonstrated that maintaining the free flow of information on the Internet is a global call and not something pushed only by a few Western states.

In recent years I have frequently spoken about Internet freedom, an issue which is a priority to the Swedish government. I have condemned the harassment of bloggers and online activists and called for a strong global coalition of states to support the simple but salient fact that freedom of expression also is applicable to the Internet.

The group of countries that presented this resolution — Brazil, Nigeria, Sweden, Tunisia, Turkey and the United States — truly represent a global coalition. And the support by other states (India, Egypt and Indonesia, to name a few of the more than 80 co-sponsors) and global civil society was overwhelming. Together, we are building a global alliance for the freedom of the Internet.

As technology and the Internet evolve, so should the work in the United Nations. From a limited group of countries rallying behind a short statement on freedom of expression on the Internet two years ago, we have seen the interest and support soar.

The vote in Geneva on Thursday was a breakthrough of fundamental importance. Beyond affirming that freedom of expression applies also to the Internet, the resolution also recognized the immense value the Internet has for global development and called on all states to facilitate and improve global access to it.

We are rapidly entering into a new world of hyperconnectivity. Mobile data traffic alone is set to increase 15-fold in the next five years. It reaches everywhere, and we see the new networks challenging the old hierarchies everywhere.

Just one example: In past decades, massive crimes could be committed in Syria and other countries without us even knowing. But we can now follow what is happening minute by minute, megabyte by megabyte.

Today, with nearly the entire globe covered by mobile networks, the problem of physical access to the Internet is almost a forgotten issue. What is increasingly worrying is what kind of access people are being offered.

We cannot accept that the Internet’s content should be limited or manipulated depending on the flavor-of-the-month of political leaders. Only by securing access to the open and global Internet will true development take place.

The governments of the Human Rights Council now for the first time have confirmed that freedom of expression applies fully to the Internet. A global coalition for a global and open Internet has been formed.

This is truly important, but we must not stop here. The challenge now is to put these words into action to make sure that people all over the world can use and utilize the power of connectivity without having to fear for their safety. This work is far from over.

A version of this op-ed appeared in print on July 6, 2012, in The International Herald Tribune.